From CryptoLUX
Jump to: navigation, search

The ARX toolkit is a set of tools to study ARX ciphers and hash functions. This is still a work in progress, and this website will be updated soon with more content.

The ARX toolkit has been presented at the SHA-3 conference in March 2012 in Washinton DC.

The first part is a tool to build Finite State Machines or Automata from a simple description of a system of Addition, Xor, and Boolean function. The input is system is described with a natural syntax, and the output automaton uses the following conventions: 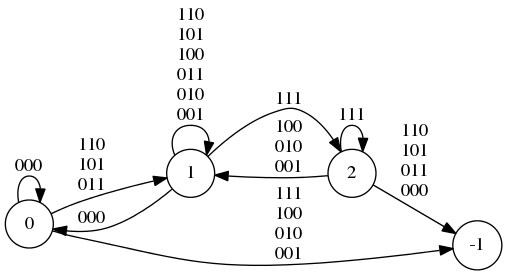 The automaton on the right was build with the following command: build_fsm -e '(V0+P0)^(V1+P1)==(V0^V1)+P2' -v -d -g -dead | dot -Tpdf. From this automaton it is easy to see that the differences that are not compatible are exactly the differences satisfying one of those conditions:

Example 2: Differential properties of the additions using our constraints set

The second part is a tool to study differential properties of ARX operations. We use an approach similar to the Generalized characteristics of de Cannière and Rechberger (Asiacrypt 2006), but we introduce a new constraint set (see the paper for details).

This tool requires the operation to be represented by an automaton, as computed with first tool, and can be used for any operation that can be written as an S-system. It can compute the probability of a path to be followed, and propagate constraints (i.e. it find necessary conditions).

Example 1: compute xor-probabilities through an addition

We can compute differential probabilities of the addition. For instance, let us consider a 4-bit addition, with the LSB of both inputs active, and the output inactive:

We run the tool as follows:

The tools computes that there are 128 solutions for (a,b,c). Moreover, the probability that:

Let us consider the same operation and propagate constraints:

The tool detect one new constraint: the LSB of the output must be 1.

Example 3: compute probabilities through an addition

We can also use extended constraints and compute the probability of more complex differential paths. For instance let us use the constraints of the previous example:

The tools computes that there are still 128 solutions for (a,b,c). This is expected, since the new constraint is a necessary constraint.

Moreover, the probability that: 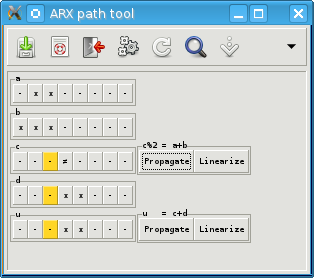 The third part is a tool to study differential paths in ARX constructions. A simple text is used to describe the cipher and the differential path, and the tool can be used to modify the path by hand, and to compute necessary conditions (sometimes, this allows to detect contradictions).

The tool can be used to study a single differential path, or a set of four paths used in a boomerang attack

The path is displayed as a series of registers corresponding to each intermediate value in the cipher, and each register is seen as a collection of individual bits. The individual bits are represented using our new set of constraints, and the constraints can be modified by hang by clicking them:

In case of inconsistencies, the bits that are involved are highlighted. You can use this to manually modify the path.

The buttons in the toolbar are the following:

Examples of differential paths are included to show the syntax of the path file.

The tools are compressed with LZMA format because other compressors give a very poor compression ration for the automata. You can uncompress the toolkit with a recent GNU tar under Unix, or with the free software 7-Zip under windows.

The graphical tool is written in Perl with the GTK toolkit. GTK-perl can easily be installed in most Linux distributions (e.g. install the package libgtk2-perl in Ubuntu or perl-Gtk2 in Fedora). On Windows, you can use camlbox.

We would like to thanks Pierre-Alain Fouque and Thomas Peyrin for their helpful remarks and comments regarding this work.

This work has been supported by the Fonds National de la Recherche, Luxembourg (AFR grant PDR-10-022).